A Co-CEO Approach to Founder Succession 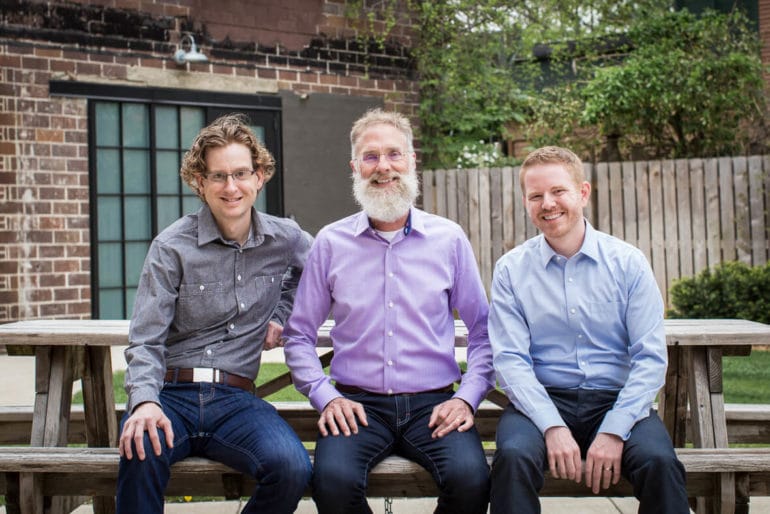 After running Atomic Object for 18 years, I realized in March of 2019 that I didn’t need to be CEO anymore. I’d accomplished a lot and done enough. It was time for someone else to take on the job of shepherding the company toward our 100-year anniversary.

Part of my transition was figuring out who that someone else was. The answer was a co-CEO approach.

When I mention our co-CEO model, I get raised eyebrows, skepticism, and the occasional joke about a circular firing squad.

What most of my business leader peers don’t understand is how strongly Atomic believes in the power of pairs. It traces back to the very first days of Atomic and our dedication to Extreme Programming and the practice of pair programming. We believe working in pairs:

Wanting those advantages in the CEO position seems pretty obvious now. I never had a formal pair in my years of leading Atomic, and it was hard for me personally and bad for the company. Lesson learned.

Building pairing into the job will surely help with loneliness, quality outcomes, morale, and sustainability. And it will add robustness and efficiency to the position.

It’s also an incredibly Atomic thing to do, though we’re certainly not alone in this approach. Earlier this year, Harvard Business Review published “Is CEO a Two-Person Job?,” which aligns nicely with my views and Mike and Shawn’s approach. Besides, it’s not like we took two people who had never worked closely together before or had divergent personalities or values and magically created the powerful pair that Shawn Crowley and Mike Marsiglia represent.

Mike and Shawn have known each other for more than fifteen years and are natural complements to each other. They not only know how to work together and listen to each other, but also how to disagree productively. Their diverse talents give Atomic a powerful composite.

Founding a company and running it past the startup phase and into the scale-up phase requires certain skills and a certain leadership style. But when that company has a proven business model, a history of success, a reliable customer base, and a firm understanding of its culture, it needs new skills and priorities to carry it into the scale-up phase. It needs less risk-taking and more stewardship. Less creation or disruption and more continuous improvement. As Mike put it about half-way through the first year, “We got a lot right in those first eighteen years. How do we preserve and scale that?”

At the same time, the world never stops changing, and some of those changes can have big impacts on business. Mike and Shawn exemplify the critical Atomic traits of being curious, tenacious, honorable, and unsatisfied. I’m incredibly lucky to have two people who work so well together and have the right combined skills and traits to take on the responsibility of shepherding an organization and ideas I care so much about.

Our successful succession was many years in the making. Shawn and Mike were part of the very first offering of the Atomic Plan, and they’re both significant, vested shareholders. Over five years, they were the beneficiaries and burden-bearers of an entirely ad-hoc, hands-on leadership and management apprenticeship/mentorship program, from which they graduated with honors and proceeded to run our largest office themselves for another five years. Additionally, since 2009, the three of us have held the governance positions within the LLC, a responsibility that’s included significant strategic decisions.

Personal style is independent of skills and qualifications. It isn’t about right or wrong, though I do believe effective leadership requires being true to your own personal style. When you change the leader, you almost certainly change the style. Style is very noticeable, and I suspect it’s not uncommon for a change of style to be a cause for concern.

I give a lot of credit to Atoms for understanding this, knowing there isn’t only one “right” style, and not confusing a change of style for a change of direction, values, or something else significant.

This Is (One Hell of) a Test

In their first year as co-CEOs, Mike and Shawn have:

That’s one heck of a first year.

Through all of this, Shawn and Mike have been excellent stewards of the company, leaning into our purpose and values. They’ve established a specific medium-term vision for the company that’s solidly grounded on our purpose. I believe they’ve earned the trust of their colleagues in their approach to the CEO role.

Shawn’s done some writing about how he and Mike have developed their co-CEO approach. The first post in his series should appear here next week.

Really enjoy the culture that imagine at Atomic Object, which I have selected as a role model for what I hope to build at Skiplist, a custom software technology firm based in Cleveland, OH.

Thanks, Matt. I’m overly busy right now, but I’d be happy to do a call with you in a few months if you’d like to connect. Best of luck with Skiplist.

Hi Carl, thank you for writing about this interesting topic. Co-CEO is certainly a unique and challenging (in a good way) direction for Atomic. There’s one area that that I’m curious about. You’ve certainly handled your own succession plan, but how would you handle co-CEO succession planning, whereby one or both plan to leave their leadership roles?

I think a co-CEO structure de-risks future successions. Losing one of them for whatever reason doesn’t leave the job empty. If it’s a planned departure, having an experienced person to be co-CEO with may allow a less experienced candidate to be considered, opening up the field of candidates. If a hire has to come from outside, then that outsider has a guide to culture, history, people, operations, etc. I’d hope that one thing that wouldn’t happen is a planned simultaneous departure. If it’s planned, then it should be able to be staggered for overlap. I’m confident Mike and Shawn would approach it that way.